TERRY Huang was upbeat when we met for a chat over a coffee. He’d been busy managing the transition of his business from acclaimed sushi palace Umezushi into a chippy called Chish & Fips. Perhaps a surprise development for many but not for Terry.

The new gaff is a modern take on the traditional chippy. Think tempura rather than beer batter, triple cooked chips or alternatives like aubergine and shiitake mushroom, and nori seaweed or schichimi (Japanese seven spice) sprinkles. Sounds great, right? But Umezushi fans are still wondering…why the drastic change?

“Overnight, pretty much all our ingredients increased in price by minimum 20%”

“We’ve had this idea since the second or third year of running Umezushi. But we were waiting for Umezushi to be ready. Then I realised that it was never going to be ready. The kitchen was not built for such special service. We sort of patched it. But that’s only part of the problem.”

Terry explained that it was his high standards and crippling financial constraints that ultimately led to Umezushi’s closure.

“It’s difficult to find skilled people. It takes minimum six months for someone to be productive or not costing us. The trouble is, it’s so simple. Any discrepancies from the standard – a gram of rice more or less – you’ll feel it in your mouth. When you eat it, you’ll know. Any diner can tell the difference. We can explain the theory but that consistency takes a lot of practise. Nowadays, it’s a lot harder to find someone that will put in that practise at home. It’s understandable. People work excessive hours already so it’s unreasonable to ask them to do further development work or go home and do research. It’s a very different climate. We had to adapt.” 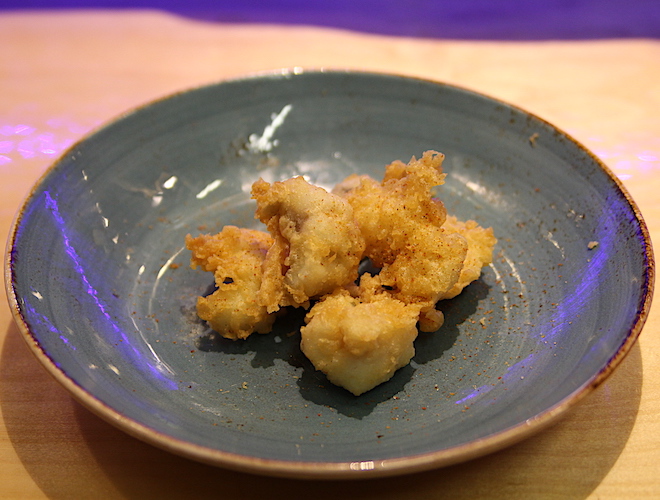 Clearly a perfectionist, Terry felt ‘forced to cut corners’. He was frustrated that they never quite delivered the standard he wanted to. Space limitations led to disheartening wastage – and then the exchange rate changed following the referendum.

“We don’t import things directly, we rely on suppliers. Overnight, pretty much  all our ingredients increased by minimum 20%. We had about six months breathing room. The suppliers tried not to increase as much as they could but it had to happen at some point.

“Our popular dish, unagi, is also highly demanded and there’s very little supply. Even without the exchange rate issue, the prices increase every year. When we started doing unagi we were paying £16-£18 a kilo – now it’s £23-£28. People keep telling me they’ve found these eels up in the lakes somewhere but nobody seems to be supplying them. Or maybe they are protected – and rightly so.” 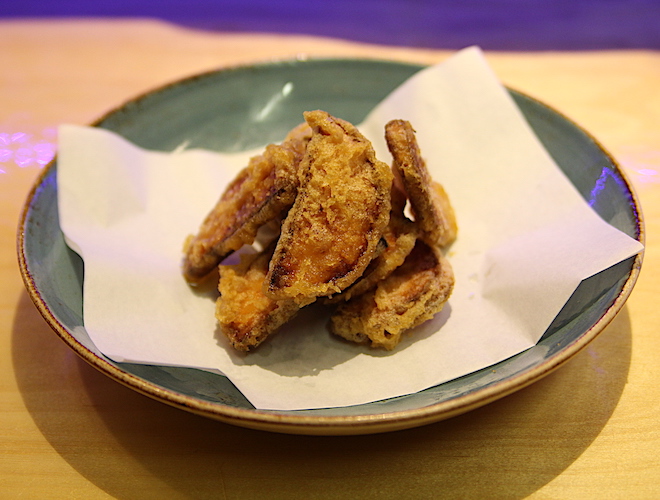 I asked Terry if he was preparing for Brexit.

“Right now, I don’t know how exactly it’s going to affect us, so it’s difficult to prepare for, but in a way the rebranding is a preparation for that.

“For Umezushi to be sustainable, even fully seated every night we needed an average spend of about £53 per person to break even. If someone can afford that on a regular basis, who wants to eat sushi? We were an extremely niche market.

“At Chish & Fips, our average spend is £15-£16 with a much wider market. People are happy to eat deep-fried fish, that’s an easy target. But then, of course, you get a lot of competition.” 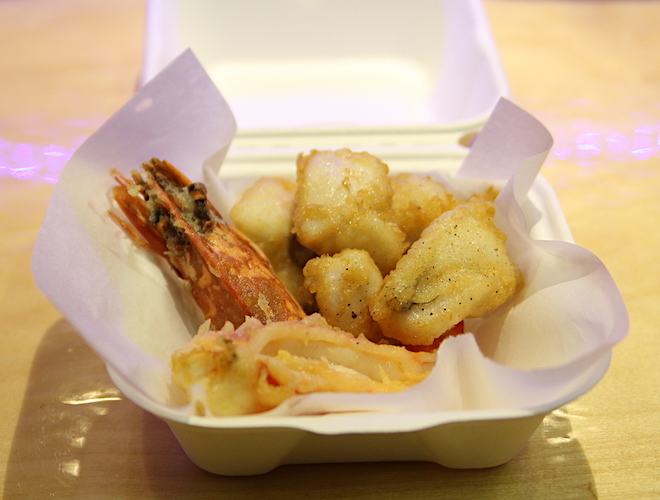 “We use Japanese tempura batter and we mix it to order so the glutens don’t develop. It stays really crispy and doesn’t get stodgy in your mouth. It’s a much thinner batter compared to beer batter. It’s a very different style.

“I don’t know anywhere else that does tempura style fish and chips over the counter. Other towns seem to have a lot of fish and chips places but in Manchester there aren’t that many. I thought maybe there is a gap in the market, or maybe someone’s been there and done that and it didn’t work. Maybe it’s a terrible idea!”

“We want to take all the elements that we have learned at Umezushi and create highly specialised fast food. “

At Chish & Fips there will eventually be Japanese-style, cashless, self-ordering kiosks. Customers will order and pay on a tablet and then collect their order when it’s ready. Terry explained that they are also working on a website application which will allow people to order on the way there, hopefully reducing wait times for customers and maximising kitchen productivity. Delivery options are a work in progress too – they want to get it right.

All of this means that the ‘Kitchen in an Arch (KIA) project Terry told Confidentials about back in 2017 can finally come to fruition. This ‘artists’ passion project’ turned business idea will be central to everything going forward.

“The Spärrows are moving out to Red Bank. That gives us more space. Kasia and Franco supplied our sake. They wanted to explore the Manchester market and we had the space available. I really liked what they did and I knew Franco’s food would be well received. I said, you don’t need to worry about the roadworks or anything, just focus on Franco’s food and people will come. I’m so glad I was right. I enjoyed having them there.” 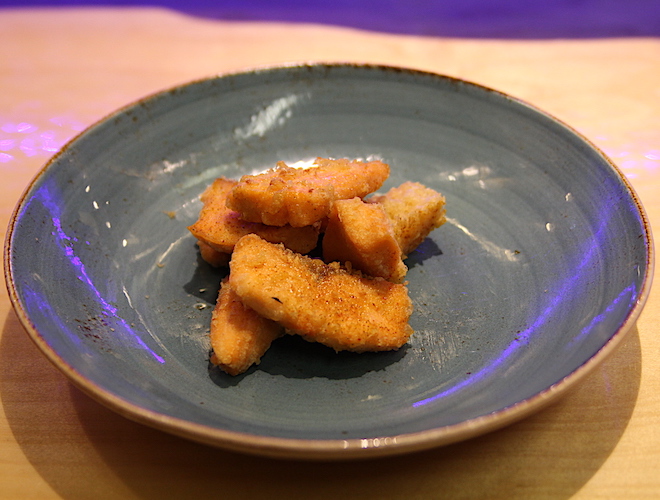 Located in a second archway just over the road from Chish & Fips, KIA will be a central hub for which Terry has ambitious plans – including a prep kitchen, a shop selling expertly prepared sushi ingredients ready for people to put together at home, a co-op style training facility, and the potential to open a whole host of fast food outlets.

“We invested a lot of time and effort into treating fish for the sushi we used in Umezushi but, because of our scale, we could never serve as many people as there was demand for – and to do it in a restaurant setting is expensive.

“KIA as a central hub can have allow us to have different tentacles but also helps us to reduce cost and be more approachable in our price point. We can deal with wastage in a much more economical way.

“We want to take all the elements that we have learned at Umezushi and create highly specialised fast food. Chish & Fips, you could say, is a specialist in tempura. Potentially there is room for a speciality in kushiyaki, the grilled skewers, or for a maki place, possibly a nigiri bar. If you look back to the history of sushi, it’s street food, it’s fast food, people eat standing up and go.” 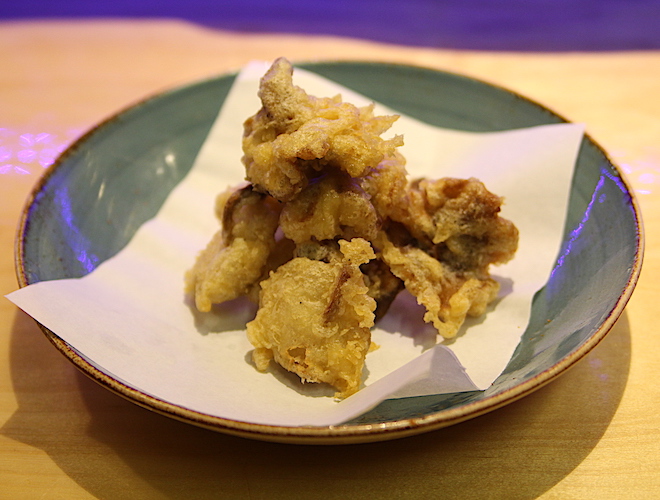 “Our old chef Omar’s started his own business completely away from restaurants. He’s doing noodle manufacture. His newfound passion.

“I realised that by mid October I was going to lose about half the team because people graduate or move on with their lives. It was a good time for me to rethink where we were going as it would affect as few people as possible. When it’s a business it’s not just me but all the employees that rely on that wage. I want to give special thanks to Omar and Hanna for devoting last few years of their life to Umezushi. They are the key people who kept it going and they made major sacrifices both in time and health.

“I’m driving all of this but what makes it happen is the team, I’ve learned things from all the people that have worked with me. I think that’s the real value in Umezushi.”