Interview: Adam Reid at The French, The Midland Hotel, Manchester.

Appointed head chef of Manchester’s most prestigious restaurant in 2013 by exec chef Simon Rogan, Adam Reid took on the big job in 2017 and rebranded the restaurant in his own name following Rogan’s departure.

During this time he has consistently produced exceptional and inventive fine dining menus whilst aiming to do away with the restaurant’s once stuffy image, promoting a more Manc ‘come one, come all’ approach. In 2016, he reached the finals of the BBC’s Great British Menu, winning the dessert course with his now trademark blown-sugar ‘Golden Empire’.

Here at Confidential, we are big fans of his work. Many of our writers have gushed about his culinary chops, as have myriad other food writers and award-givers. Yet, that Michelin star keeps on shooting past Manchester, destined for pubs in places nobody has ever heard of (nothing wrong with that, by the way) and places in Mayfair.

Never mind all that. We got hold of the talented Mr Reid for a chat about his craft, his thoughts on vegan tasting menus (“a load of rubbish”) and the secrets of his store cupboard.

You took over the reins in the kitchen at The French from Simon Rogan of L’Enclume fame, which is number one in our Top 100 guide. Those are pretty big boots to fill. Did you feel the pressure then and how do you feel now you’ve had a few years at the helm?

AR: “No not really, I’d been there right from the start with Simon and I know why we achieved what we did so I believed we could do it again. The main pressure was to find my own style of cooking. Now, two years in, I believe I’ve done that and we are really enjoying refining what we do and trying to take it to the next level.”

While you were recently awarded a fourth AA rosette, that pesky Michelin star keeps on eluding you. How frustrating is it or do you get more determined every year?

AR: “Achieving our fourth AA rosette was a massive accomplishment. We also rank really highly in the Good Food Guide so we are obviously pushing the right buttons for some people. Michelin are a different guide and have their own expectations, I don’t know what it requires to achieve a star and to be quite honest I don’t really care. My main focus is to cook food I can be proud of, that really wows the customer and highlights the best produce I can get my hands on. Don’t get me wrong, I’d love to be recognised by Michelin, but to be honest I want to be recognised for what I do and for a unique food style, so that’s what I’ll be concentrating on.”

I just want to remove the ‘trying too hard’ pole from everybody’s backside.

You have made some significant changes to the style of menus on offer at The French. Are times changing when it comes to fine dining, returning perhaps to shorter menus and away from long successions of feats of molecular gastronomy?

AR: “I think as long as you are clear about what you do and then follow that through with the quality behind it, customers will go with you. Personally, I like things to be straight to the point, quality driven and not be full of pointless extras. There’s definitely a place for destination restaurants and they are what push the industry forward. But for us, we realise we are a restaurant in a hotel in a city centre with a unique market, so we just try to keep things simple and straight forward whilst giving that little extra that you expect from a top end restaurant.”

You’ve said that you would like to make The French more accessible and move away from an overly formal sense of fine dining stuffiness. What changes have you made to that end and do you have any other ideas in mind?

AR: “Talking to the customers, not at them! I just want to remove the ‘trying too hard’ pole from everybody’s backside. I like to have a laugh and enjoy myself when I eat out but you can only do that if the staff enjoy it too.” 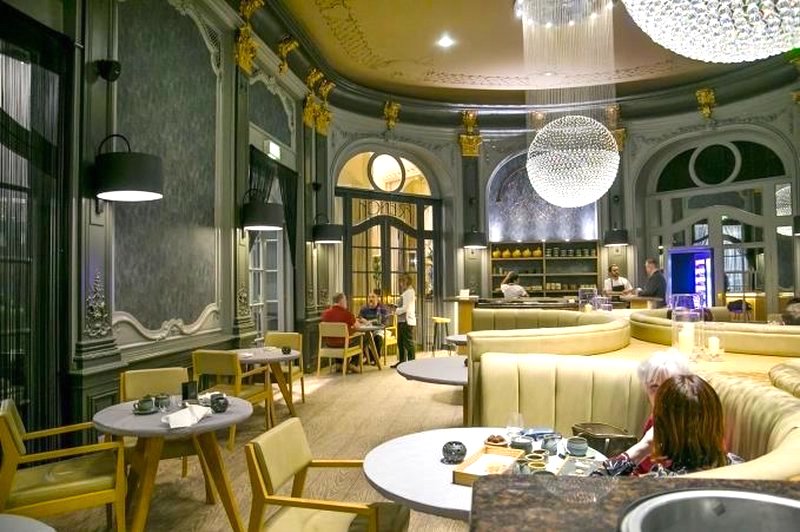 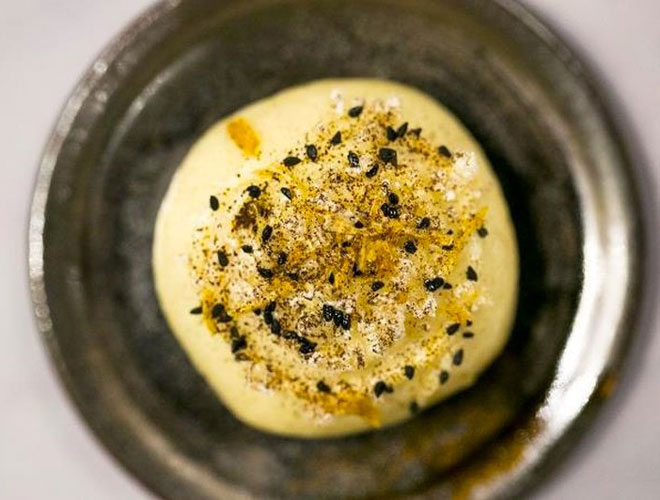 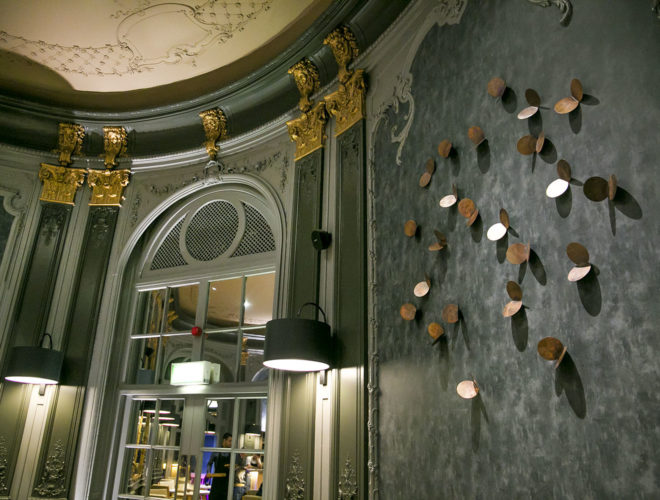 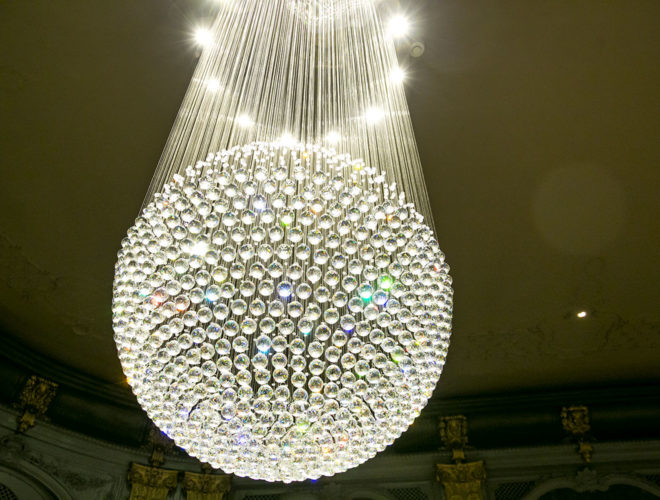 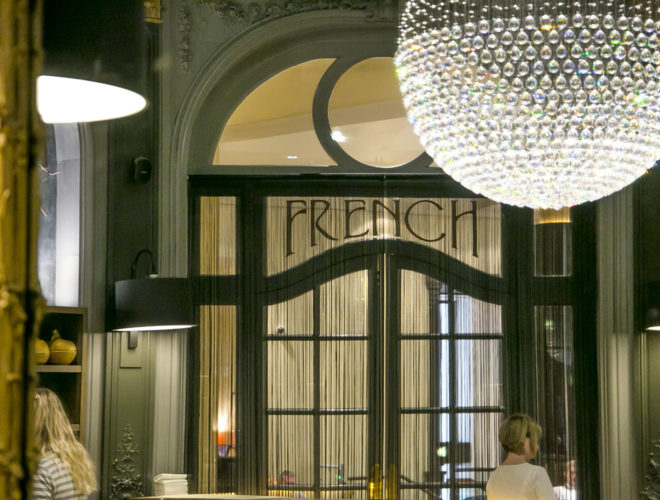 One of the other changes you’ve made is bringing music back to The French with your own personal playlist. What are some of your favourites at the moment?

AR: “So many: The Everly Brothers, anything Bowie, New Order/Joy Division, Otis Redding, The Beach Boys, Lou Reed, Joe Brown, all The Beatles, Oasis/Stone Roses, The Arctic Monkeys… I have a very eclectic mix but they fit in when you’re in the room.”

How was your Great British Menu experience and would you do it again?

AR: “Horrible. Yes, despite that.”

Sustainability is a buzzword. Is it something you think about going forward? What kind of changes can restaurants make towards being more sustainable?

AR: “Sourcing produce is the main thing, isn’t it? Just buy from good suppliers who you trust and who you know work in ethical and sustainable ways, even if it makes things a little more expensive.”

I see you’ve been to Alaska recently and mentioned that sourcing products from further afield is something to think about post-Brexit. Is this a real concern for chefs? Are you stockpiling like Jack Monroe?

Ar: “Haha! No, it’s difficult to stockpile the top quality fresh ingredients that we use. I’m always open to new produce and the way they operate over there with their wild fish stocks is really impressive. There are some major logistical issues (it’s on the other side of the world) but to have such an abundance of wild produce that lives sustainably and naturally in a managed stock system surely opens up possibilities for the future.”

What about veganism? I’ve noticed some fine-dining establishments are doing vegan tasting menus now. Is this on the cards for you?

Right. Ok. Lastly, where are your favourite places to eat in the North West? Any hidden gems?

“There are so many amazing places: Moor Hall (and The Barn), Freemasons at Wiswell, The White Swan at Fence, Moorcock Inn, Forest Side. All Gary Usher’s places, Pollen Bakery, Parker’s Arms. I could keep going…”

Find out more about Adam Reid at The French here.