AS El Gato Negro prepared to launch its brand new restaurant in Exchange Flags at the beginning of August, Liverpool Confidential’s Stephanie Whalley stole an hour with chef patron and brains behind the operation, Simon Shaw.

They discussed his presence at the Liverpool site (where Vincent Café & Cocktail Bar used to be) for the last few weeks and, in the same tone as a ten-year-old on Christmas morning, waxed lyrical about how strongly “it just feels like the right place”.

As his empire grows, the chef remains humble. Stephanie got the low down on his inspirations and his hopes for the new place.

They chatted about the historic square of limestone heritage buildings that make up Exchange Flags, just off the beaten path of the city centre.

Simon explained how picking the perfect venue is crucial in the success of his restaurants and how he gets “a second sense if it’s going to be good”. Perhaps he meant ‘sixth sense’ but why stop a man mid-flow when his zealousness and enthusiasm is that infectious?

Speaking of sixth senses and all things superstitious, the story behind the name El Gato Negro is an interesting one.

It translates into English as ‘the black cat’ and was a phrase that struck a chord with Simon during one of his rambles around Madrid. He jotted it down on a piece of paper, tucked it away in a notebook and forgot all about it – until fifteen years later, when he was in the early stages of starting his own tapas restaurant.

It was at that very moment that the piece of paper he had scribbled on over a decade before decided to fall from the book during a tidy-up and he knew that he had nailed the name of his restaurant.

Well, you know what they say about black cats and luck… 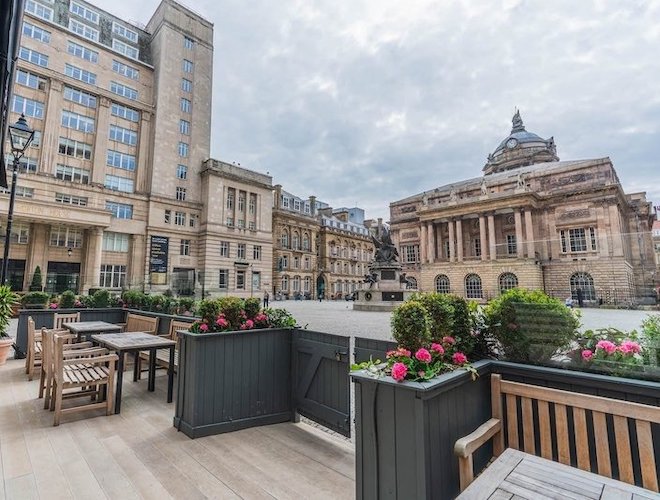 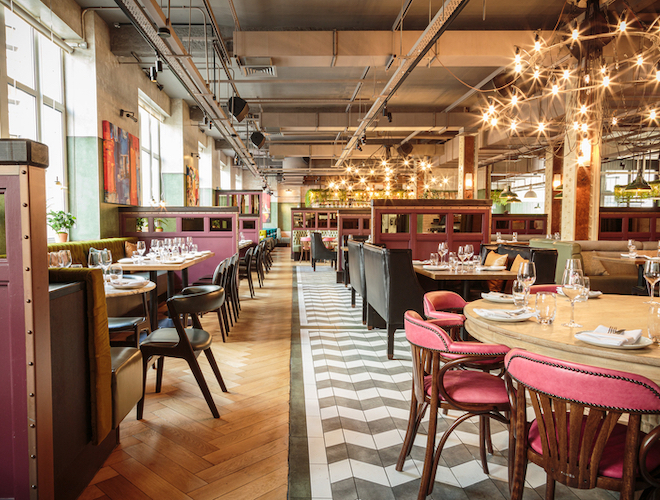 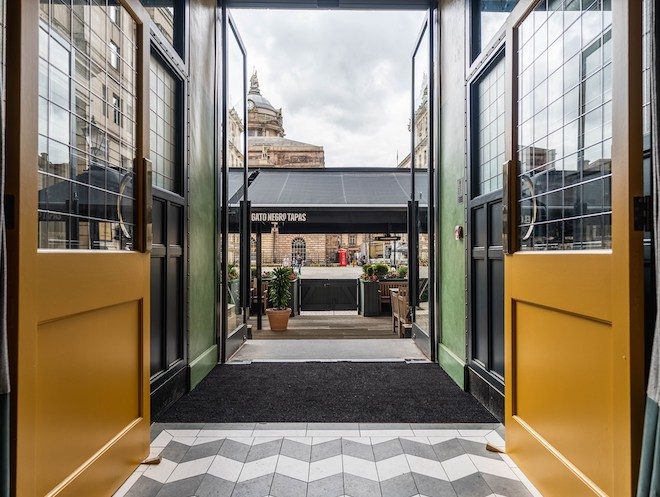 El Gato Negro Liverpool follows the original Ripponden restaurant and highly successful Manchester venue (which opened on King Street in 2016) and precedes the recently announced Leeds venue, which will launch later this year.

When asked what the Liverpool edition of El Gato Negro will offer that differs from the others, Simon said that while “the DNA and core will be similar”, the place will have its own unique identity and “stand out on its own merit”.

This will be present in the design and decor but also with a selection of Liverpool-exclusive dishes to keep both customers and chefs on their toes.

The food and drink menu is still going to be heavily influenced by Spanish culture and the tapas-style dining that Simon loves to both cook and eat, following years of travelling around Barcelona, San Sebastian and “treading every inch of Madrid”.

Tapas cooking and dining sets no rules, pushes boundaries and, in Simon’s own words, is all “a bit Salvador Dali” with lots of ingredients and different methods.

He described it as “just magic” and recounted how it hooked him after years of more classical cooking in kitchens such as Harvey Nichols Knightsbridge, where he was Executive Head Chef.

“People who live in Liverpool love the city”

As he plans to eventually spend around two days a week in each of the restaurants, taking the reins at Liverpool will be Head Chef David, who Simon says he “knew in (his) mind was the right guy straight away”. He carried on to explain how he likes to employ people that are as good, “if not better”, than him and that the menu will be “driven by the quality of the ingredients”.

Expect everything from Josper-cooked chicken thighs to authentic croquetas and plenty in between.

For El Gato Negro OGs, fear not for the famous Anglo-Euro Scotch egg – with roots in both Simon’s birthplace of Yorkshire and the colourful gastronomy of Spain – will be going nowhere.

He mentioned how they’d recently looked at some stats and discovered that, since opening, the Manchester restaurant had served 77,000 portions of the signature El Gato Negro Morcilla Scotch Egg, with three in each serving. That’s 231,000 Scotch eggs hand-rolled on-site. 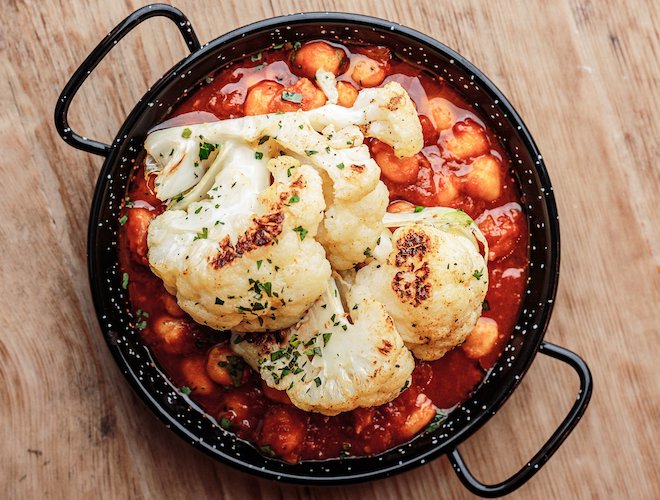 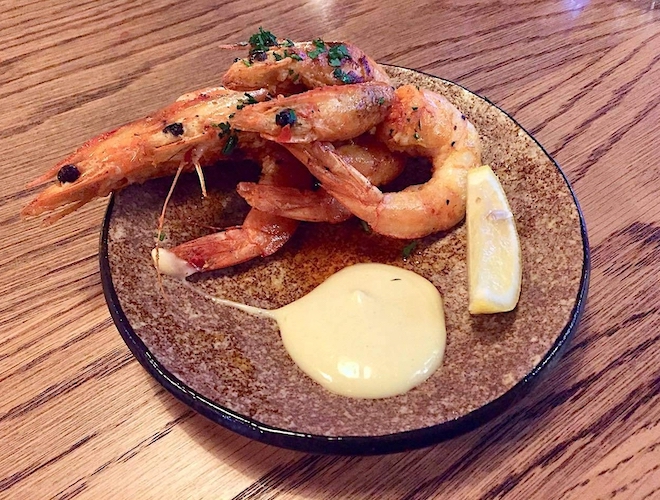 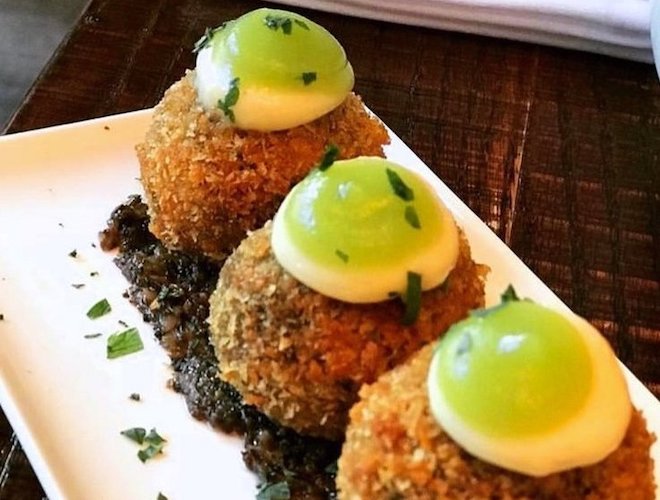 It’s hard to believe that the man who made an entire city go gaga for a refined version of the humble picnic snack loves nothing more than beans on toast or poached eggs for dinner.

That’s the endearing thing about Simon, he’s a guy with his feet firmly on the ground and it shows in his accessible and accommodating approach to building an independent hospitality brand.

There’ll even be a charcuterie counter in the Liverpool restaurant geared up for solo diners – a way of eating out that Simon believes is the best way to experience food and flavours without distraction, through his own firsthand experience.

He said that’s one of the things he loves so much about the city of Liverpool – the people who live here work hard and aren’t afraid to spend their money on doing what they love: going out.

He quite rightly observes that “people who live in Liverpool love the city” and “enjoy spending their money on experiences” more readily than material things.

He also loves the sense of community and how it’s not too far off big Spanish cities in its look or feel. A real home from home, one might say, and we would most certainly concur.