Neil Sowerby finds a glimmer of light on the border

LOCATION, location? I’d never really given much thought to the architectural riches of the Chapel Street corridor until my lunch companion, who had walked down from Salford Crescent Station, got all enthusiastic about Salford Cathedral and the edifices, once home to the Royal Hospital and the Town Hall – and now to flats.

We could see the latter from the snug warmth of the New Oxford pub, our meeting place before crossing Bexley Square to newly arrived Porta.

So tapas to tap into the potential custom from the apartments transforming the once arid reaches of the A6. It’s not easy being in the vanguard.

I’ve no idea which sea the prawns for our trio of croquetas de dia came from but a world away from the gloopy stodge you often bite into.

A break-in the week Porta opened signalled to bold co-owners Ben and Joe Wright: you’re not in Chester and Altrincham now.

Take heart. Earlier pioneers Vero Moderno, in the Vimto Gardens block, is a culinary destination in its own right.

They believed the developers’ mantra: “The combination of old and new will create a unique city high street with a quirky, creative feel that’s perfect for young professionals and families alike.”

Just make sure you have a good alarm system….

The building occupied by Porta is a beauty, too, sensitively adapted by the Wrights, showcasing the large, shapely windows and elaborate cornices.

This former bank has something in common with Jamie’s Italian and Flok – retaining a vault with an original safe in the basement. 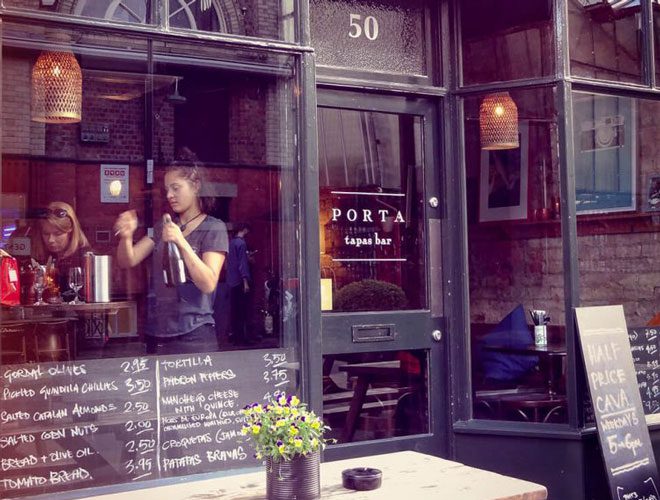 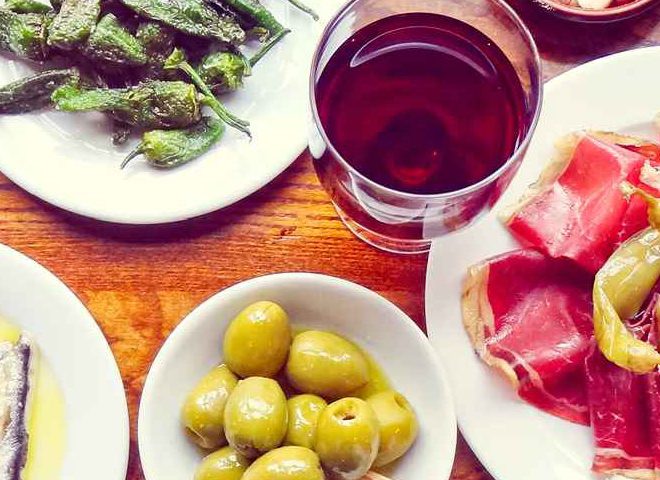 Here it houses a compact Spanish wine collection that ticks all the boxes. Two glasses of chilled Manzanilla, accompanied by a bowl of salted Valencian almonds and suddenly shafts of Spanish sunshine illuminated our mezzanine table.

Outside it was still chucking it down.

As at the original Porta, tucked under Chester’s city walls and at number two opposite Altrincham Market House there’s an avoidance of stereotypical decor. The kind that screams Matador, Flamenco – lets Fandango to a Gipsy Kings soundtrack.

Downstairs is oddly pubby even. Though at the New Oxford you can’t sit at the bar and watch a chef stirring a large pan of spinach for tomorrow’s special.

Only comment on Porta from a punter in the Oxford was: “I heard it’s a bit pricey”. Only by Greggs standards.

The menu is certainly more affordable than El Gato Negro and Iberica in Manchester city centre.

The tomato bread (£3.95) is maybe not on a par with another rival, Lunya on Deansgate, but like them, some seriously good sourcing goes on at Porta.

Not all Spanish imports – the  bread is artisan baked in Altrincham. I’ve no idea which sea the prawns for our trio of croquetas de dia (£5.50) came from but, a world away from the gloopy stodge you often bite into, these offered the quintessence of prawniness (prawnery?)