Chaat Cart, one of Manchester’s original street food vendors, is closing their Marple restaurant. The last service will be on Saturday 1st February.

The restaurant, which opened in May 2017, was the first bricks and mortar site for owner Aarti Ormsby who had built up a loyal following for serving top quality South Indian street food at markets, festivals and events. Chaat Cart was named Street Food Vendor of the Year in the Manchester Food and Drink Awards 2017 and were among the inaugural residents at Spinningfields’ The Kitchens project which ran a competition to help fledgling street food businesses to secure a more permanent site.

The Good Food Guide 2020 listed it as a local gem, citing bold, vibrant small plates and fantastic service. We had a chat with Owner Aarti to hear about why the restaurant closure is more of a forward step.

What led to the decision to close the Marple restaurant?

AO – “It’s quite a complicated question and there’s a lot to it. The way people go out is evolving, which is why I’m such a big advocate for food halls. We started off doing street food and then opened our own restaurant. But food halls are closer in spirit to what we were doing before with our pop-ups and we’ve potentially got another couple in the pipeline. So we’re evolving our business model.”

Where can people find you?

AO – “The Produce Hall in Stockport, The Mad Giant in Didsbury and Kommune in Sheffield.”

“I really want to celebrate the positive things that came out of it based on it being the right time to bow out rather than thinking something bad has happened.”

Is spreading yourself across a wider area, having more outlets with a faster turnover part of your new business plan?

AO – “At the food halls, we can just concentrate on the food, whereas the restaurant also has the service aspect of it, the bar and other complications. So although it was fantastic to have and it’s been wonderful to showcase what we could do, I think in spirit, the food halls help us stay closer to what we were doing before. I like the accessibility. Not just with the location but the price point and the kind of food. You can come in three times a week at lunch, or you can come in with your family at the weekends. You can have bigger groups of people who can all have something different, whereas a restaurant they all have to have pretty much the same type of thing. Eating out is more of an occasion these days where you have to book beforehand and commit to at least a couple of hours. It’s more of a commitment to go to a restaurant.”

Are you still catering for private parties?

AO – “Yes, absolutely. We’re going to keep that up now we’re not doing so many festivals and events. We still have the same chefs and the same recipes and the same sort of commitment to serving the food we had at the restaurant. Just email me.” 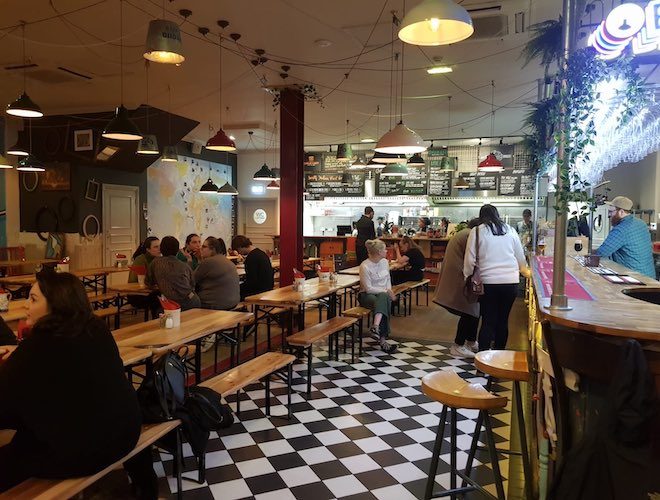 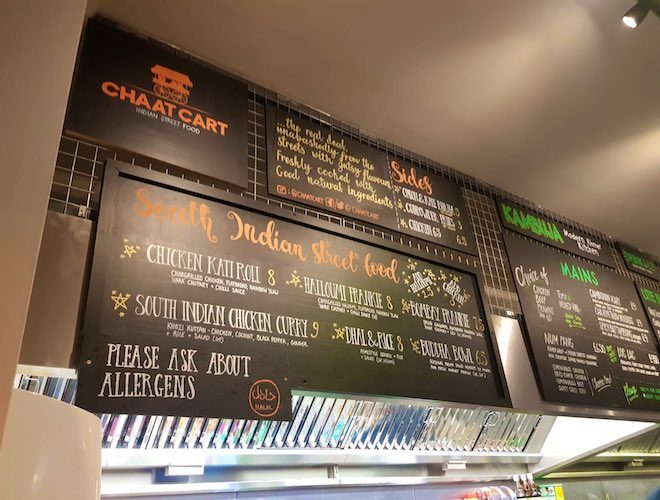 Did owning a restaurant conflict with your work life balance?

AO – “It’s not something I publicly talk about but I do have three children under eight, and a restaurant is such a big commitment in terms of time. So partly, having one less site will allow me to have more of that.

With a restaurant, you constantly have to be moving forward and it’s such a time commitment. I really enjoyed it and it’s something I never thought I could do but compared to the other sites, the restaurant is a much more complex being. With our restructuring and refocusing, we can now put our attention on one thing rather than trying to do everything and be all things to all people. We can now focus our energy and attention of making what we make in the food hall as good as it can be.”

What was the thing that finally made you decide to look at addressing your business model?

AO – “I don’t think it was just one thing or that anything that’s gone wrong. If you read what I put on Facebook, I really want to celebrate the positive things that came out of it based on it being the right time to bow out rather than thinking something bad has happened. The costs of running a restaurant are significantly higher than being part of a food hall as I’ve said several times before to anyone who would listen. It’s the difference between, say, being in a shared house and splitting the bill, versus owning your own house and having to pay to fix the roof. The way people are eating is evolving. My youngest is about to start school in September, so this is the last bit of time I’m really going to get with them.”

What’s happening to the staff?

Everybody has been offered alternative employment at one of the other sites. Not one person has said, ‘Right, I’m off.’ We’re not shutting the doors completely, we’ve just come to the end of this part of our journey and we’re really proud of what we’ve achieved. It’s a bit sad, but I don’t feel like we’ve failed.

“We’ve got some really good teams. We’ve taken people that have been with us and promoted from within, which is really nice. Terry who runs our Stockport branch is pretty much our first employee from when we started in The Kitchens in Spinningfields. When we won the Manchester Food and Drink Festival street food award, Charlie, who’s on all the pictures, is now managing Didsbury. We’ve got people who have come through the ranks, so it’s really nice in terms of trust. I have a lot of faith in them and I’m quite excited.”

So it’s more of a new chapter then 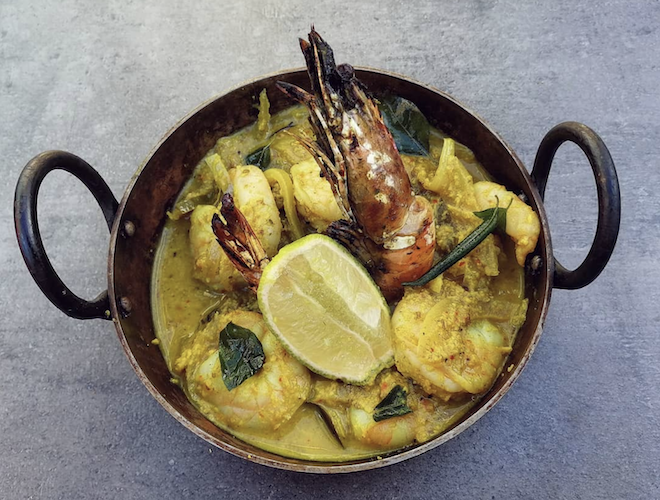 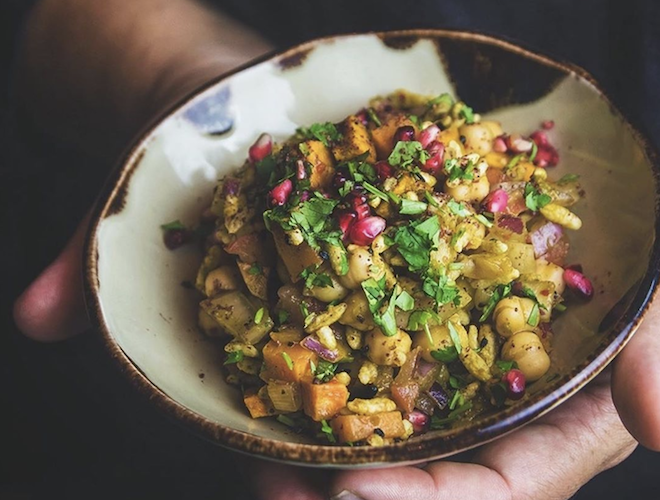 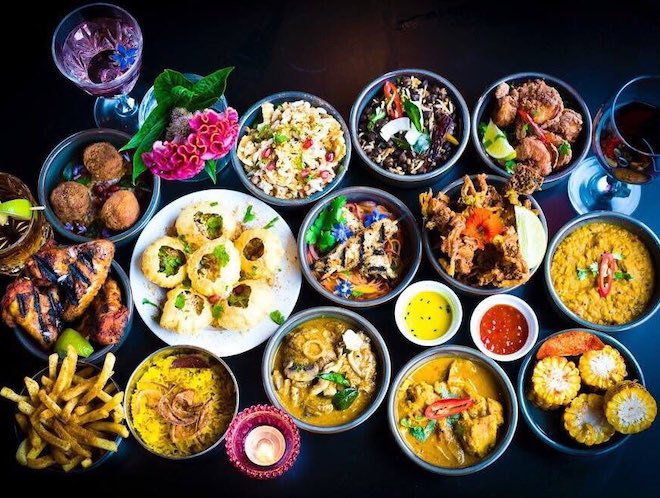 What can you reveal about plans for the future?

AO – “There are a few creative opportunities and collaborations that I’m looking at. I can’t really say too much about it yet but we’re still around and we’re actually easier for most people to get to now. We’re now more of an accessible, budget-friendly option.”

AO – “I’m still completely involved every day, looking after the menus, the setting up, the flow. I do everything from designing, marketing, food tasting, cooking and training. You know what it’s like when you run your own business and still having to do things like the washing up and removing cobwebs and changing the toilet rolls. That’s the nature of it. Chaat Cart is still very much a family business – still just my husband and me sorting HR and finance and such. We’ve been around a long time but it’s still just us, so we’re like a little indie that has a few sites but the heart and soul is still there.”

How have things changed?

AO – “You have to keep moving forward. We were doing Indian street food, like, eight years ago and now it’s become more mainstream like a lot of other things we’ve brought to the restaurant. We never had plastic straws for example, always paper, and we were one of the first to do gin tastings. We’d work with brands that we’d met at the markets and we’d invite them to come and showcase their brand. Now it’s quite commonplace to go for a gin tasting.

“When you’re an entrepreneur, you’re kind of beating your own path. It might not always be right, but you have to try.”