Lisa Goodwin-Allen works bloody hard. We tried for weeks to get an interview with her but every time we called she was knee deep in dumplings, juggling her many executive chef duties with teaching, or off cooking for charity in the big smoke. We eventually pinned her down to ask her about the many strings to her bow and she remained exceptionally humble about her work and constant support of others.

Goodwin-Allen took over as executive chef at Michelin star restaurant Northcote in late 2017. Her predecessor and mentor Nigel Haworth held that post for 30 odd years before stepping back into his current role as chef ambassador. Lisa worked her way up through the ranks having started at Northcote aged 20 and quickly moving up to chef de partie, becoming head chef at just 23.

She was the first woman to win BBC2’s Great British Menu in 2010 and has since become a familiar face on our TV screens as a judge on the GBM and Masterchef The Professionals. She still finds time to do charity events and teach at Northcote’s culinary school.

“There are probably more women in the industry than we know about. Things have changed and continue to change…”

You have just finished your huge annual Obsession event. How did this year’s festival go, any highlights?

LGA: “It went fantastically well. It’s a huge responsibility and an honour to co-ordinate with the chefs and their ingredients. Part of my role during Obsession is to welcome these amazing chefs through the door, put them at ease in our kitchen and source the best ingredients possible so they can produce food of the same standard as their restaurant with the support of the Northcote team.

The 16-day festival started in 2001 and each night sees a world-class chef cook in our kitchen. This year, the guest chefs had 15 Michelin stars between them. Matt Orlando from Amass Copenhagen produced extremely good dishes on his night, also Sayan Isaksson, who is a Swedish master and very talented. It was an inspiration to see Andrew Wong’s influences and to work alongside him was a complete privilege. And Norbert Niederkofler, the three Michelin star chef from Italy, his was a surprising evening; a simply executed menu but it was delicious.”

I noticed you had a ‘girl’s night’ as part of this year’s Obsession. There still aren’t that many women in the top jobs in the industry. Why do you think that is?

LGA: “There are probably more women in the industry than we know about. Things have changed and continue to change and we have to keep encouraging that and make people aware of the opportunities that there are.”

Do you think it’s important to have more gender balance?

LGA: “It’s about the individual. Having women in the team offers balance, and there are more opportunities available. The work/life balance is changing, which is attractive for all. If you have the drive to succeed, go for it! We have to encourage others as much as possible.”

You also do cooking master-classes at Northcote. How important is teaching to you and why?

LGA: “Teaching is massively important, you’re inspiring and helping others. Mentoring is vitally important for the future of Northcote and its team as well as for the industry and the next generation of chefs.”

You appeared on the Great British Menu and had a winning dish, rabbit turnover, which you served to Prince Charles. How was that experience?

LGA: “Great British Menu was one of the highlights of my career. It was hard but enjoyable and allowed me to meet some amazing chefs and suppliers. Being the first female to win was quite an achievement. I would love to be part of the judging panel now and still be involved with the show – it’s a great series.

“I really enjoy TV, and having the opportunity to inspire others by telling my story, talking about my influences and Northcote or sharing recipes.” 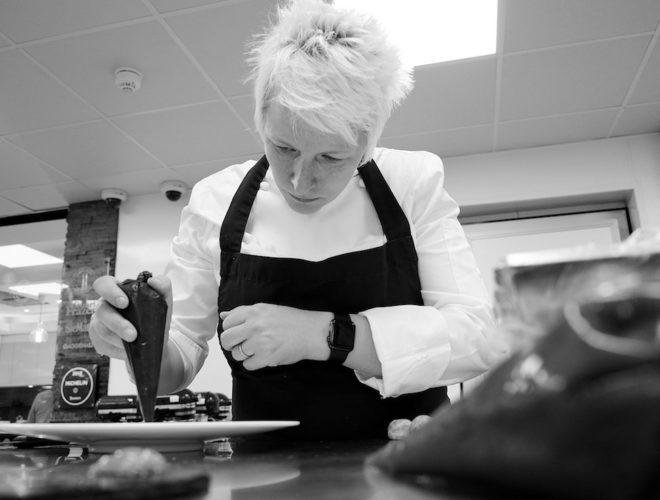 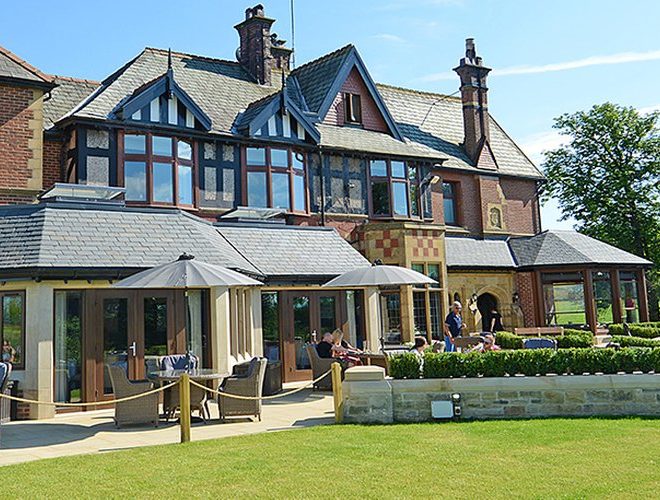 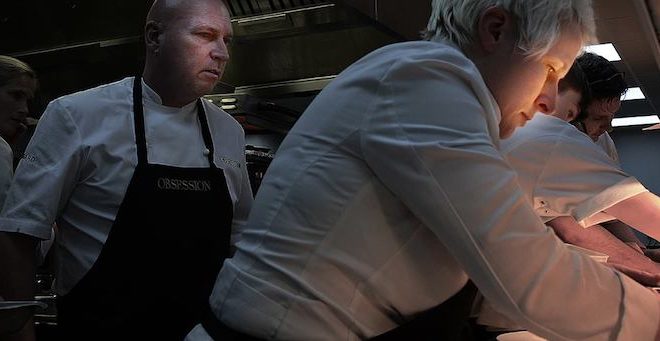 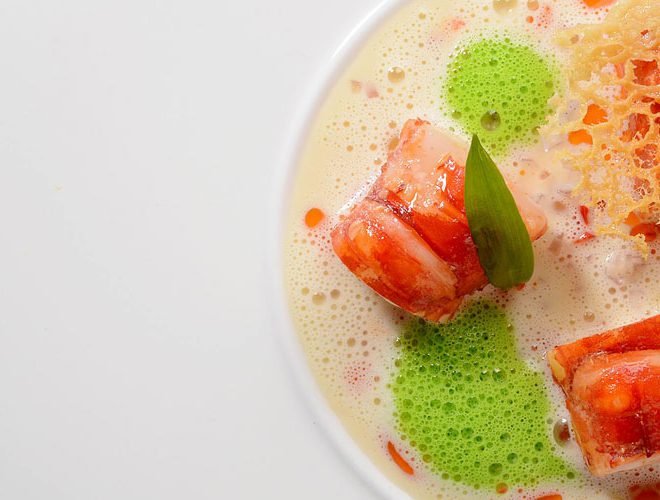 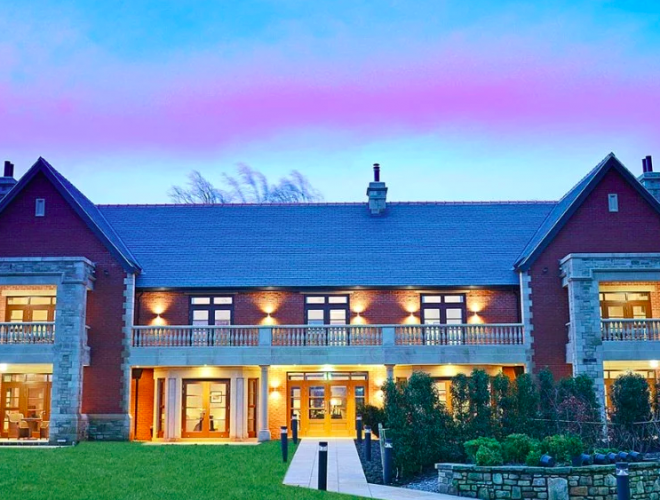 You recently popped down to London to cook with Alain Ducasse at The Dorchester in aid of The Bobby Moore Fund and Cancer Research UK. Tell us about it.

LGA: “It’s an amazing charity and I’m lucky to be able to come together with other chefs to lend our support. It was a great evening with amazing chefs and friends. I love being able to go out and cook – it’s an honour to do my bit.”

Gordo says that last time he dined at Northcote; he felt that your food was even better than your predecessor’s. Was it a conscious decision to step up your game and impress in your new role?

LGA: “I think people saw that I’ve developed as a chef over the years and it was my time to have my own influences. It’s an honour to see that people are enjoying and supporting Northcote and I want to keep learning and driving forward.”

We have noticed a subtle shift in the way menus are going and are wondering what your thoughts are. Are chefs moving away from serving huge numbers of courses and back to fewer but more substantial ones?

LGA: “Trends naturally change and swap over time. It’s very much dependant on the style of food you’re serving, your ethos, what area you’re in and the expectation of your customers. Our aim is always to make our guests happy and their feedback helps us stay on top of our game.

Your menus are very playful and creative. How important is it to be creative in the kitchen? Does it ever result in disaster?

LGA: “I enjoy the creative process, it takes thought and drive. Through reading and educating myself on flavours and ingredients, it inspires me to create. There are always trials and testers when a dish is in the development stages, sometimes things don’t turn out as expected but a dish never reaches any of our menus unless we’re absolutely sure it’s right.”

Which of your new dishes are you most excited about at the moment?

LGA: “The Ox on the tasting menu is such a tasty dish. Although it’s a familiar cut of beef, tongue oversteps the boundaries for some. It’s traditionally a cheaper cut, but we serve it with gherkin, dill and brioche which gives it a familiarisation and elevates it to a higher status.”

LGA: “Our producers take real pride in their products which means they are top quality. Ascroft’s cauliflower, Leagram’s Dairy, Lake District Farmers and Hodgson’s Fish over in Whitby are all so passionate about what they do, which reflects in the ingredients that come to us.”

You are so locally minded in fact that you grow much of your own organic fruit and veg on site. Does this affect the way you approach the creation of dishes?

LGA: “Our approach is always ingredient-led, inspired by the seasons. It’s important to taste every element of a dish so the ingredients speak for themselves.

I was really impressed to see that you also have a plant-based tasting menu on offer. How much of a challenge was this to come up with? How would you say it stands up against your regular tasting menu?

LGA: “It was challenging, but with the North-West producing fantastic ingredients and with the influence from our own biodynamic garden at Northcote, the menu stands up. The longer it’s been on its having more of an impact, especially with the change in lifestyle as families are choosing to have one or two meat-free days a week. We’re finding increasingly meat and fish eaters are choosing the plant-based menu for something different and really enjoy it.

Northcote has now been acquired by The Stafford London, can we expect changes on the horizon?

LGA: “First and foremost, Northcote and its team will remain loyal to the ethos we have developed over the years, but yes there are changes ahead, and all for the good, improving the experience all round, it’s very exciting, watch this space!”

Finally, where are your favourite places to eat in the North West at the moment?

“I like The Inn at Whitewell, it’s a relaxed setting and the food is humble but tasty.”

Northcote is one of our Top 100 restaurants – see more here.